I figured I'd try something new, and I can't say how much I'll commit to doing this or how often it'll be, but I figure I'd jot down some fairly unorganized and trailing thoughts about working on this area of the game, as well as share some things I've shown on Twitter that I didn't share here. These can contain in-game lore, progress shots, spoilers, etc and are likely to be very wordy and unorganized. If you'd like to be mostly surprised by the game, please avoid reading these- but if the development process and planning interests you, please check it out~

Lugosi is the 3rd area of The Transylvania Adventure of Simon Quest- Located to the South-East, beyond the Waterway and the Spirit Woods. The Lugosi region is an extremely dense, humid, and poisonous swamp oppressing the villagers trapped under Dracula's curse. Simon arrives to find that villagers of Lugosi have organized a search party for Doctor Brumble have all gone missing. Doctor Brumble, who does vital research on the far East outskirts, is the lynchpin to the effort of ridding the region of the curse, and finding a way back through the Spirit Woods without getting lost.

This area was a lot of fun to make, and it's one that I had planned for a long time. I've had just about every aspect of this game planned since around the first month of development, leaving room for some emergent design between point A and B, and this one was definitely one that let me play around with some things.

When I started planning Lugosi, I went in knowing I wanted it to be an area with a branching path, one leading to a person of interest, and the other leading to the mansion, and I knew I wanted to have the swamp boots be important to get to the mansion. These were the only things set in stone when I began working on it. I also wanted the mansion to be focused on Bees (which is definitely used as a colloquialism for flying bugs with stingers in this).

Originally, I had the swamp boots planned to be at the person of interest's location, but the more I thought about it, the less I wanted to have another "go to point A, get item, go to point B" fetch quest. Instead I opted for the idea that maybe the villagers of Lugosi were relying on this person for information, supplies, and hope, and when they haven't heard from him, they organized a search party. I eventually settled on the person of interest being a scientist who studies the dark sciences of Dracula hoping to find a way out of the swamp, which granted him great knowledge of anachronistic and infernal technology and success in purifying the area around his lab, and the villagers searching for him succumbed to the intoxicating effects of a pollen giant bees had spread on their way back to their hive. 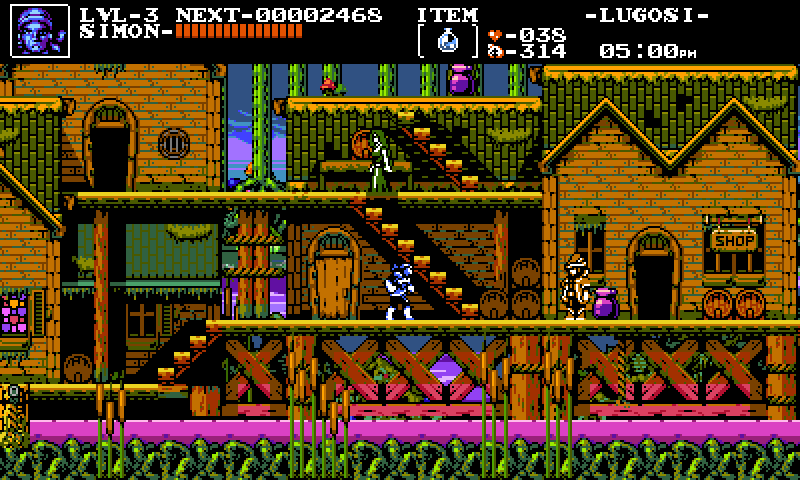 The Town of Lugosi

Along the way to search for the lab, there are various villagers in a haze, but talking to them hints to the player that they need an item to snap them out of it. I really wanted to stress to the player that there is a legitimate task that needs to be performed in the area. It helps give more investment in what's going on and gives the player an objective. 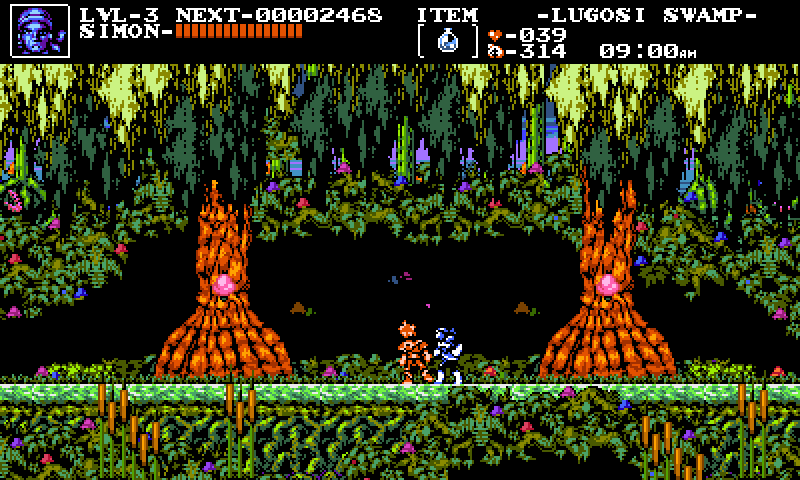 The Shopkeeper in a Haze

Once the player arrives to Doctor Brumble's lab, they're greeted by Beegore, his servant, who informs the player that his master has gone to the hive for research, and that the bees are the key to everything. This sets up an optional reveal later. In the lab, the player finds a note from Doctor Brumble that he's completed a medicine to counter the pollen haze, and then the player can save villagers. 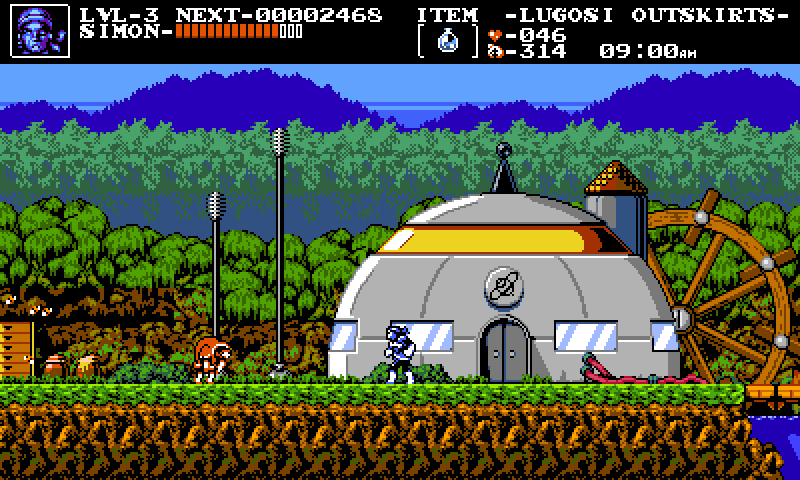 The driving development philosophy I have with this game is that the player should be led in a direction, but not forced there. One of the first things the player will notice when they enter Lugosi Town is that all internal buildings you can enter are empty, including the shop. With every town having a shop with upgrades, it subtly tells the player that there's a task that's needed to be done in order to progress. The first villager you see in a haze outside of the town is the shopkeeper, which sets up the goal of the objective- to restore the shopkeeper. Getting the medicine and waking up the shopkeeper is the absolute minimum required to get the Swamp Boots and navigate to the Hive. If the player chooses, they can forego saving the other villagers and save only the shopkeeper. Alternatively, skilled players can sequence break by damage boosting through the swamp and are not required to partake in any of the Lugosi quest. This of course is the more difficult option, as the whip upgrade is unavailable until the shop is accessible. Each region of the game has a self contained "entry fee" of sorts for their respective mansion, and I think the villager rescue works pretty well for this area.

Every enemy in this area is unique, and each is swamp/humidity related. I really wanted to drive home how oppressive this swamp is, so each enemy requires a bit of understanding before you can successfully navigate. For example, the first enemy the player sees in Lugosi is the Horntoad, which takes a lot of hits to go down. The player finds out later that holy water can kill them quickly. Some enemies, like the Mushroom Skele has a high range melee attack, as it uses the whip upgrade the player receives in the area, so it's important to kill it from a distance. This makes this area likely have the highest bar of entry, but also the most strategic and fun to play. 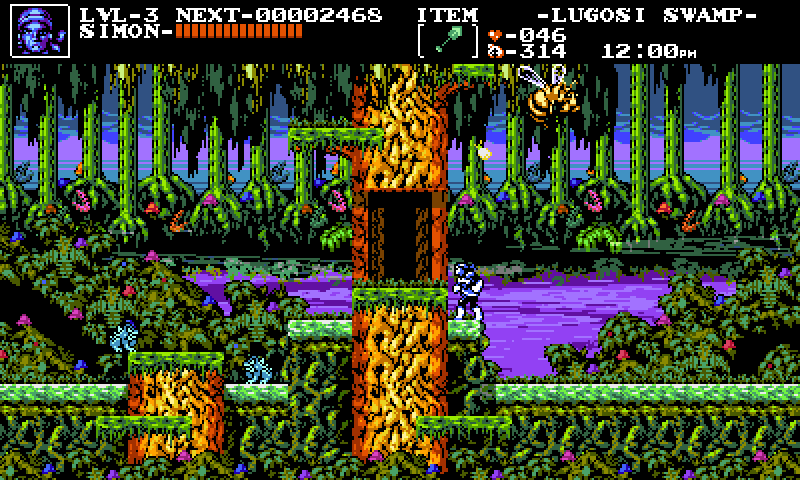 Horntoads and a Pollen Bee

There are also enemies that require the player to use the shovel to dispatch, or they will keep spawning. This entire area is built to be deceptively overwhelming to the player, and the enemy design reflects that.

The Hive, aka the "Bee Mansion": 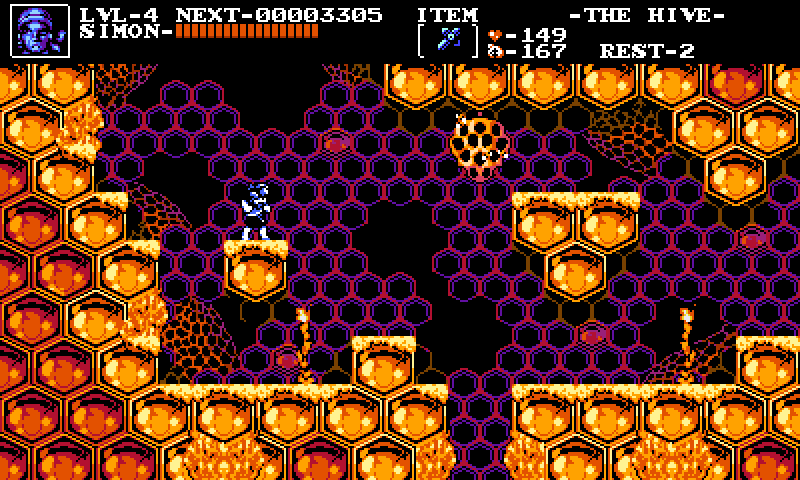 This whole mansion was a lot of fun to make. I've had it in the works for over a year now, and it's a wild ride. I managed to squeeze in a lot of references; one of which I had actually intended for the next area of the game, because it fit a lot better.

That reference is my "Bee Bike" segment. It was originally intended to be a water race in the Sloan area, but I knew for this mansion I wanted to have riding a bee a mechanic, and it manifested as a big Battletoads inspired segment. 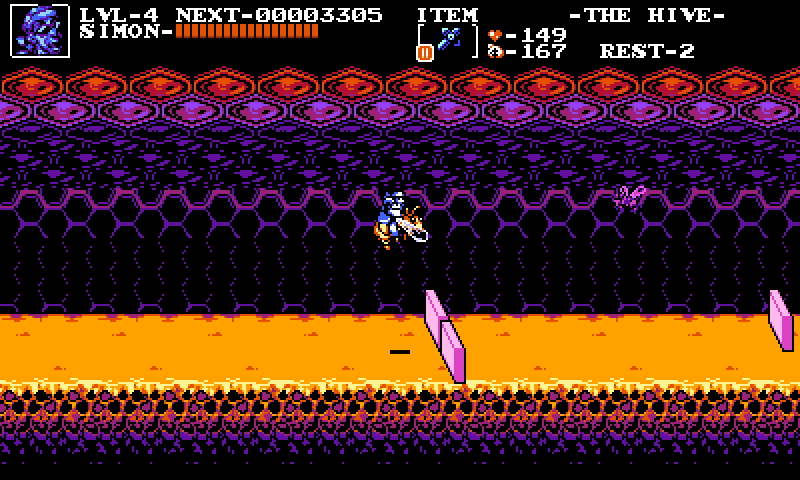 I also try to break apart mansions into recognizable segments with drastic visual changes. For example, the Bram Mansion goes from being this lavish Mansion to a huge underground waterway infested with crabs, then back up to the roof of the Mansion. Bela Mines starts as a standard mining operation to bright crystal caves. This mansion goes from beehive motif to elaborate structures and architecture to even worse infestation. 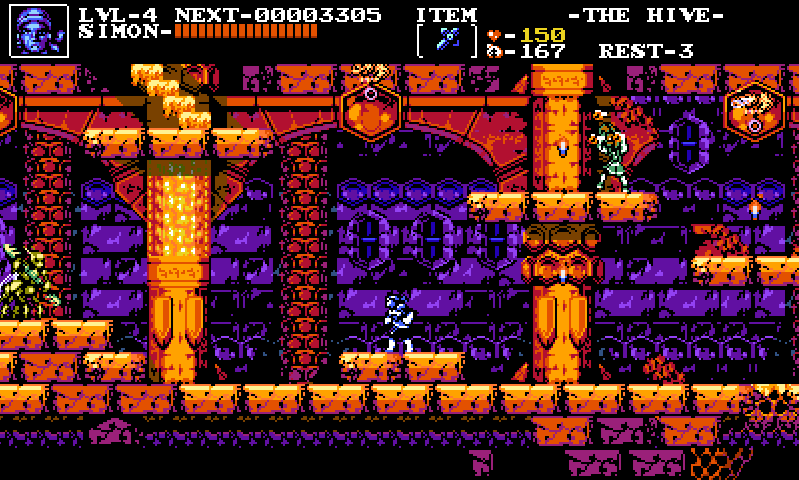 Deep within the Hive

Another thing I wanted to do with this mansion is stress the importance of moving forward and not staying still for too long. There are disappearing blocks, enemies that seek you out, swarms of bees that fly around, and even a segment where you have to climb up a tower while honey rises, flooding the chamber. There is a drive to keep moving. 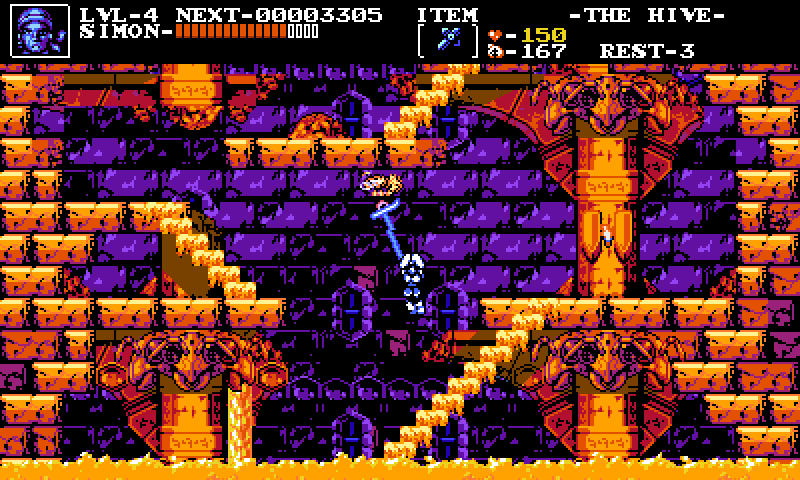 Swinging across a gap while honey rises

In the later portion of the mansion, the visuals change once again to a very twisted, infested area drawing heavily from some Cronenberg/HR Giger inspirations, with a lot of subtle body horror in the background, hopefully to inspire some discomfort in the player as they delve deeper. 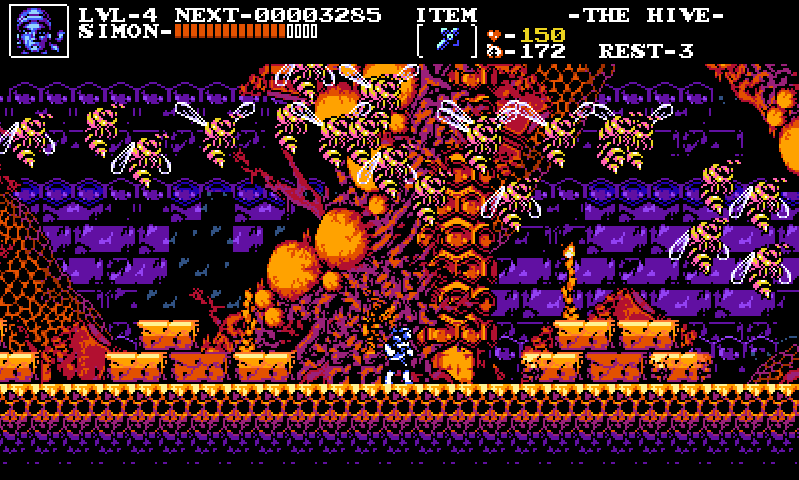 A Swarm flies above

These visual inspirations are paid off with the Hive Queen- the main path's boss. From a technical standpoint, this boss is the most impressive in the game, however it was probably the easiest to program. I wanted to simulate the "dark room with large background element boss" aesthetic from NES games, while still going beyond that visually. I also wanted to capture the absolute horror of a giant queen to a hive of this size. 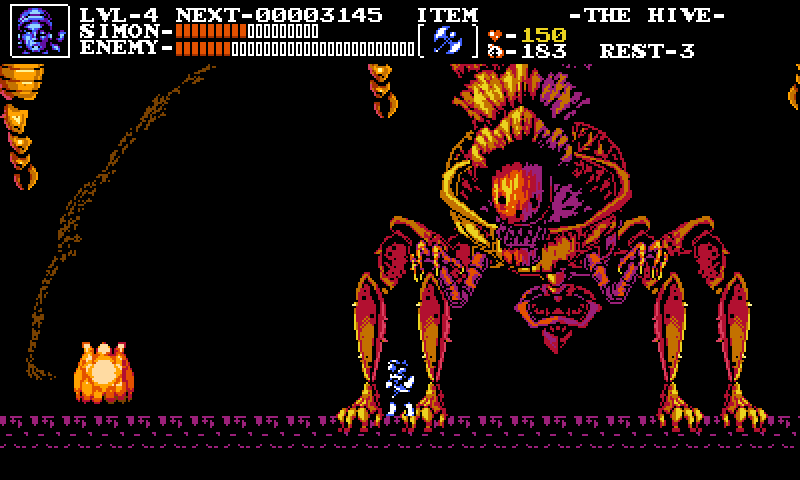 The Queen summons eggs while following the player ready to strike

It's been a lot of fun working on this. I'm not exactly 100% happy with EVERYTHING, but it all works well together. It's been a challenge to make everything connect coherently and thematically while taking a wild ride through drastically different visuals. Overall, I'm happy with it.

I should also note, that I'm not 100% finished with this area, nor did I discuss everything in here. There is still an entire alt path for this mansion that is only about 50% complete, and a 2nd boss that I have barely started. I look forward to working on the next area though. It's gonna be fun!

Anyway, this has been my word vomit on the development of this area. If you read through all of this, I appreciate you! If you didn't, you made the right choice because this is a lot of rambling! I do hope my transparency on the development does something for someone though!~

Get The Transylvania Adventure of Simon Quest

The Transylvania Adventure of Simon Quest

There's a certain melancholy to finding what looks to be a great game on itch, only to see that the last dev update was in 2017. After playing through and deeply enjoying the demo, I am very glad to see that it is still in active development!

I generally don’t post many updates on here, but for the most part I have regular updates over on Twitter~ I think I’ve worked on this game every day since may 4th 2019 save for a couple stretches (from other obligations) and it still hasn’t gone stale for me~

Donated again because I saw this update!

I am really excited to see the final game! You are doing a fantastic job! Keep it up, please! I will be 100% buying this game.

Wow it looks freaking amazing!!! The Battletoads bike part is giving me a little ptsd though haha...

It's a lot more forgiving than Battletoads, since you don't die immediately after hitting a wall, but- it gives me some ptsd looking at it too haha